Sorry, I'm taking a little time off, since there is nothing to blog at the moment. So I'm going to try reposting a few gems from the archive. This one is from March 4, 2007, when we lived in our last apartment. Enjoy!

Decorating Schmecorating: or What we did on our Top Design vacation!

So, we have a week off from Top Design. Most people's reaction seems to be "Oh, thank goodness; we needed a break!" It's not a good sign for a show when people are glad it's off for a week.

During our time off Eric and I decided to redecorate one room in our apartment for each of the Top Design challenges so far. OK, we didn't really do that. But it's a good idea; someone should do it!

Instead we thought we would share our decorating secrets with you: 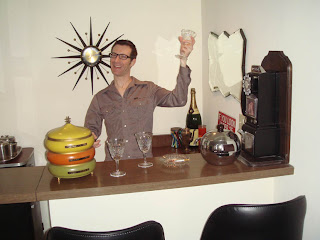 Step one: have a drink! 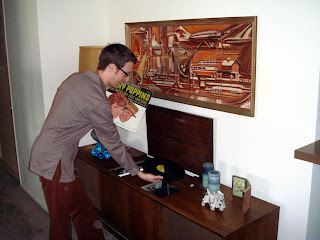 Next, put on some music!

[The painting is by an extremely unknown artist named Helen Parks. If you've heard of her let me know] 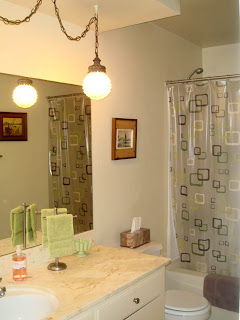 [The bathrooms have the only original lighting fixtures in the apartment. They're groovy!] 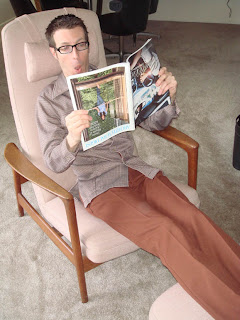 Then read a style magazine such as Architectural Digest or Hello magazine!

Repeat step one (see above)! 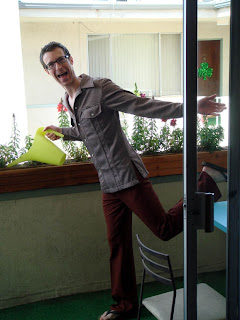 Relax in the garden!

[I planted those snapdragons last spring and they just won't die!] 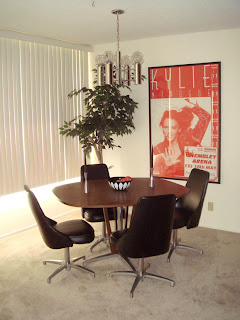 Get inspiration from Kylie Minogue (mainly applies to Other Eric)!

[I had to put up the vintage lighting fixture to replace the horrible new one that was put up before we moved in. We also had to reapply the acoustic cottage-cheese ceiling. Just kidding!] 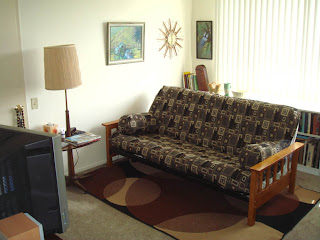 Move the entire contents of your studio apartment into one bedroom of your new place!

[The book shelves were super cheap at Office Depot but they fit the wall perfectly for a built-in look. p.s. I know that painting is too small for the wall but, living in Los Angeles, I can't stand having something big and heavy hanging over a bed] 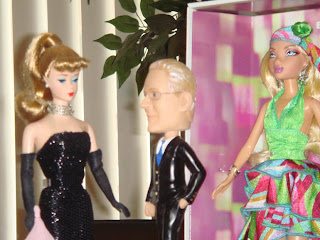 Tim Gunn: "Barbie, you're looking a little Joan Collins there."

Barbie: "Would you rather I look like that My Scene tramp standing behind you?" 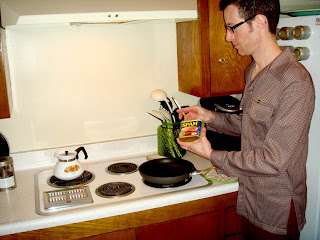 Finally, fix yourself a little snack! 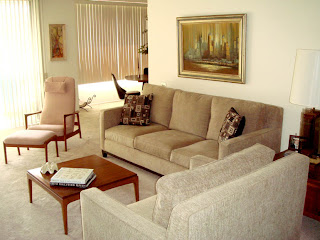 And that's how you can get a beautiful apartment like ours!

[We found the painting over the couch at a thrift store for $25! What do you mean you think we got ripped off?]

Eric will put up some other nice pictures of our apartment on his blog, Everything Eric in a couple of days. Hope you had a nice week off. Now it's back to the torture of watching Top Design!

Top Chef New York Reunion Special: It's time to move on with our lives!

I know Top Chef tries really hard not to be a carbon copy of Project Runway but there is something nice about having the reunion show prior to the finale. Obviously, you can't reminisce about the finale in that case because it hasn't happened yet but there is a whole season to talk about and several months have passed since the taping of the regular season has ended. Most importantly, people still give a shit.

But Top Chef just has to be different and give us the reunion after all the excitement of the season has already disappeared. I've moved on with my life, Bravo! It's taking all my energy to care about a group of people who will never in a million years be made into supermodels!

Andy: "Tonight we'll find out who's not in a relationship, who got drunk, and we'll have an exclusive interview with that woman who had the octuplets!"

Andy: "Say hello to the judges and congratulate Hosea!"

We start with the obligatory Bravo bromance. This season it was between Fabio and Stefan:

Viewer from Pasadena: "So are you guys gay or just European? We are so confused."

We learn about the birthday curse.

We have the obligatory Bravo clips of someone talking too much. This season it was Jeff. I have to admit I loved it when Padma sighed with exhaustion while looking at one of Jeff's dishes.

We learn that Tom saved a woman's life:

Woman: "My life had no meaning until I ate at Craft and I discovered how good food could taste. He truly saved my life!"

Tom: "Oh, stop. You're embarrassing me."

We have a question for Gail:

Viewer: "Are those real?"

That was so inappropriate. Instead of answering that question, Gail will talk about Toby:

Gail: "He really isn't as big a bitch as everyone thinks."

I'm sure she's right. He actually didn't come across that badly. In the first few episodes he was in I got sick of his canned quips. But then he settled into just being mildly annoying and I started to enjoy the fact that he always disagreed with Tom. As you could tell from reading my recaps, I was always waiting for Tom to lose his temper throw a punch. But Tom is just a big teddy bear:

Tom: "Having your restaurant reviewed by a food critic is much harder than being judged on Top Chef."

Toby: "How would you know? You've never been a contestant on Top Chef."

Time for another question from a viewer:

And then we get to the relationship between Hosea and Leah, popularly known as Hoseleah. We start with clips of them discussing their doomed relationships back at home:

Hosea: "I don't want my girlfriend to leave me."

Leah: "I don't want my boyfriend to leave me just because I kissed a guy one time."

ONE guy? ONE time?

Andy: "OK, so are you guys married yet or what?"

Hoseleah: "We live in separate cities."

Andy: "So what you're saying is that if you lived in the same city you would get married."

Andy: "I'm going to take that as a yes. Tom is prepared to give Hosea a job in New York and we have an Elvis impersonator/minister standing by so congratulations!"

Hoseleah: "We're not getting married."

Andy: "But it's obviously what America wants. Don't be so selfish!"

We see scenes of Glad wrap volleyball and Leah and Jamie getting drunk.

We see clips demonstrating that Stefan likes women and then some viewer wasn't paying attention and missed the nicknames this season so we see clips about that.

Then Gail tells us that Daniel Boulud catered her wedding, which is pretty cool:

Andy: "And here's the most boring picture we could find from the wedding."

Then we see clips of Jamie saying things like "This chicken is pecking at my shoes" to prove that she's a big complainer:

Carla: "I think it's defense mechanism. She's obviously afraid people might think she doesn't complain enough so she makes up for that by complaining a lot."

Jeff tells us he was misquoted in People magazine:

Jeff: "I didn't say Tom's food was boring. I said he was a talentless jerk. I feel really terrible that they got that wrong."

We see clips about all the bald heads this season. But technically, Eugene and Patrick are not bald. And I have to say the Bravo special-effects department really went above and beyond with those photos with superimposed hairdos.

Fabio wins fan favorite. Congratulations, Fabio! Fabio and Carla were definitely my favorites, although I would not have been surprised at all if Stefan had won; he was one of the most entertaining chefs this season.

And that's it. Bravo viewers get a well-deserved break! I'll have to find something else to blog about for a while, since we have no idea when Project Runway will be on. I'm not blogging the supermodels. But maybe Top Design or Shear Genius will be back someday soon. Thanks, again, for reading!
Posted by eric3000 at 3:35 PM 3 comments: