Project Runway Under the Gunn Season Finale: My first and last post of the season!

First, a message from our sponsors:
BRIAN BOLAIN, LEXUS GUY: Each of you is going to get a new Lexus…
OH, MY GOD! SERIOUSLY?
BRIAN BOLAIN, LEXUS GUY: …to use for the duration of this blog post.
oh. you suck.
OK, so I didn’t blog about Under the Gunn, but, as a field reporter for Blogging Project Runway, I had the pleasure of attending the taping of the final runway shows in Los Angeles a few months ago. So I’ll write a bit about the finale, focusing on the most important part: me.
How did I get in to the finale, you ask? Well, first I went to the Benefit Cosmetic and Blow Pro Styling Studio and got myself all pretty, then I grabbed my purse, which I had picked up at Francesca’s at a great price, and then I drove in my brand new Lexus to the Universal City metro station, where I took the subway downtown.
When I got to the theater, I told them I was Daniel Franco and they let me right in. I'm just kidding. I didn’t need to sneak in at all, because I was on the guest list! So, they’re like, “Walk down the red carpet and stand and pose for a photograph,” and I’m all, “Red what, now? Stand for a what? I don’t understand any of these words.” Then I just ran as fast as possible into the theater because I'm a complete weirdo.
I sat toward the front, on the center aisle, next to the runway. Nicholas, one of the UTG designers was sitting directly in front of me. He was very nice. He is a huge liar, though. I’m teasing! He had to lie to me because I stupidly asked him if he was a designer and obviously he couldn’t let anything slip, so he told me he wasn’t. I asked because he was wearing a very cool jacket that I assume was his own design and also because he basically just looked like a designer. And guess what? I’m not as stupid as I am, because it turns out he actually IS A DESIGNER! Anyway, when the season started, I couldn’t figure out what it meant that he was sitting right there; I don’t remember seeing the other UTG designers in the area. I knew it meant he was either eliminated immediately, or he was in the finale, or he was eliminated somewhere in the middle of the season. And I was right!
Sitting nearby were Bert Keeter, Mila Hermanovski, and Alexandria von Bromssen, who were all super cool and lovely. The first few rows were also filled with PR alums. I was sure the producers would get close-up reaction shots of them during the runway show, which would result in really good shots of me on television. But, for some reason, we were ignored. I don’t get it. I mean, sure, Shan’s children are cute, but are they really more adorable than I am? Please.
I’ve talked about who was sitting in front of me. Now, let me tell you about the people sitting directly to my right. They were complete nobodies. No offence, but they were so not famous it was physically painful to sit next to them.
Seven hours later, the show started.
The collections were anonymous. The shots that were broadcast with the designers introducing their collections to the audience were created digitally. They are the most impressive digital effects I’ve seen since “Noah.” I also think the clothes must have been digitally enhanced in post-production, because I was shocked at how much better these collections looked on television than they did in person. Up close they looked pretty awful, but now that I’m seeing them again, I think they’re not so bad. Maybe it was the harsh lighting that made everything look bad. The only problem with that theory is that Heidi Klum was in the same harsh lighting and she looked more stunning than ever. 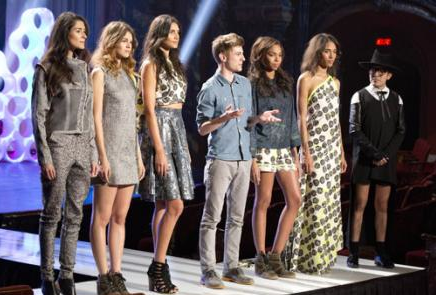 Sam: This was probably my favorite collection, but I can understand the judges being slightly underwhelmed by it. 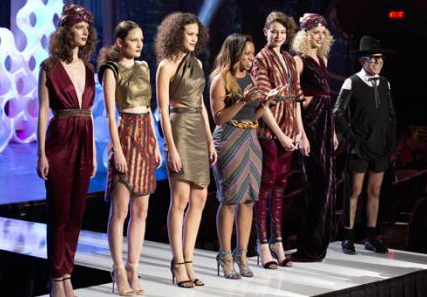 Asha: The jumpsuit was cool, but the fabrics and styling for the collection were just slightly off. I agree with NPH that it looked like the inspiration was a fortune teller. And that’s not what Asha was going for. 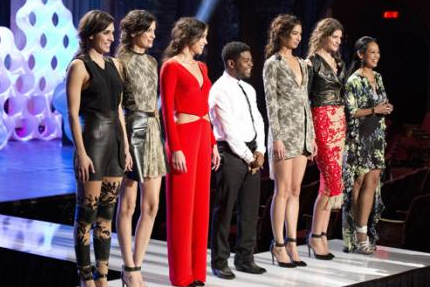 Shan: He had two really great looks here: the red jumpsuit and the print dress with the biker jacket. The other looks were just not up to the level he had demonstrated during the season. And, again, keep in mind they look much better on television than they did in person. Those pantyhose leggings actually don’t look so bad here, but up close they made me gag. Fortunately, UTG had thoughtfully left bags under our seats, with Benefit Cosmetic lip gloss and mascara and a coupon for cubic zirconia earrings from Francesca’s. It was a very nice gift bag. To puke in. 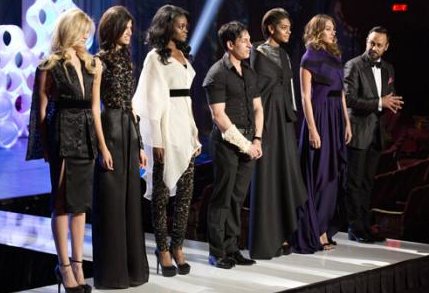 Oscar: I liked the polka-dot top. And I think his designs are much less tacky than they were at the beginning of the competition. So, congratulations!
Before we go, Kylie Minogue has a question for you: have you been worried lately that your consumption might not be conspicuous enough?
Posted by eric3000 at 10:06 PM 8 comments: