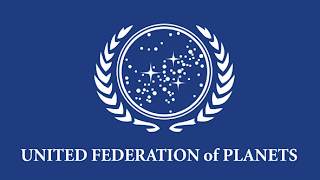 We start the episode with the designers standing on the lawn of the United Federation of Planets headquarters in New York:

Is it? It just looks like a lawn to me.

Issac: "Yes, but this grass represents the efforts to work together to solve shared problems, such as galactic climate change, tribble over-population, and peace."

Peace is a problem we are trying to solve?

Isaac: "Peace is so boring."

Anyway, why don't you explain this week's completely nonsensical challenge?

Isaac: "It would be my pleasure. This challenge is to create a dress inspired by the colors of a flag, just like Catherine Malandrino did." 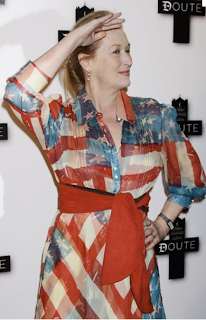 I hate to be a contrarian, but that's not so much "inspired" by a flag as it is made out of fabric printed with the image of a flag.

Isaac: "Well, for instance, they shouldn't do this:" 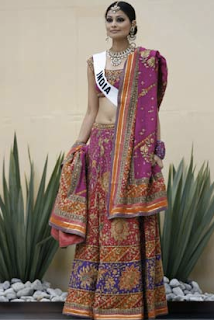 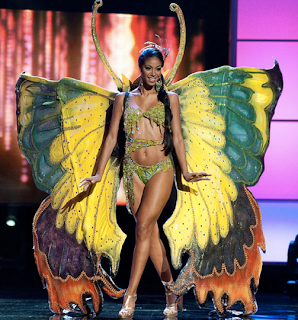 Isaac: "See? That's an example of how you could take a look worn by real women in Brazil and just update it for a young, modern, sophisticated woman."

So the secret is subtlety?

Anyway, the designers have to make garments inspired by the flags and inhabitants of members of the Federation of Planets:

Austin gets the planet of Betazed.

Austin: "It's very feminine and soft and you can tell the woman who wears this is very emotional and loves chocolate." 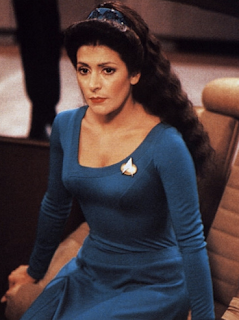 That neckline is so NOT regulation!

Jerell gets the Vulcan empire. He loves how ethnic and Vulcany they are: 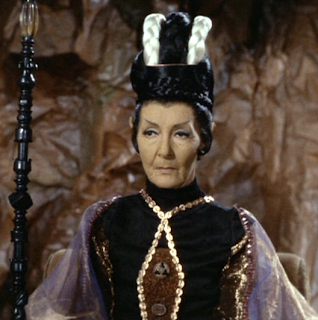 Kenley gets the Borg: 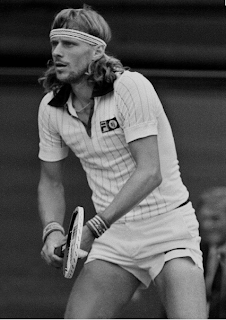 Hot, but not the right Borg. Let's try that again: 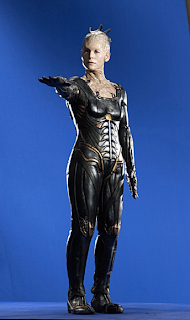 OK, again, it's totally cute, but she makes the same thing for every challenge.

Kenley: "That's what I wear every day and I only design for myself. Resistance is futile."

Mondo gets the Ferengi Alliance: 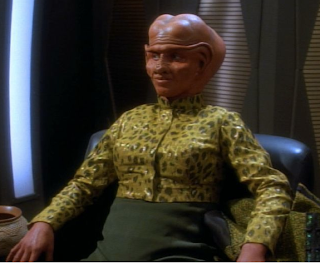 It's a surprising use of color. The judges love it. Mondo wins! Congratulations, Mondo! And Joanna appreciates that the model can wear a bra. You know what they say about women with big ears.

Michael just doesn't get it: 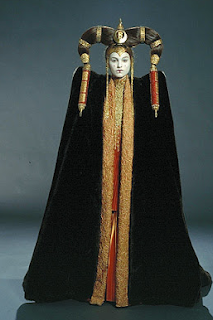 Michael: "What? My model looks so sexy, she's making me question my pon farr!"

Mila gets the Klingon Empire. She loves how tribal-looking and independent they are: 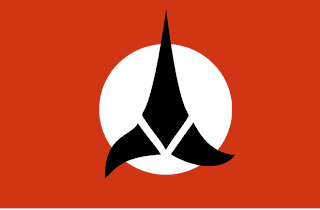 Isaac: "It reminds me of communism. She's just hard to look at." 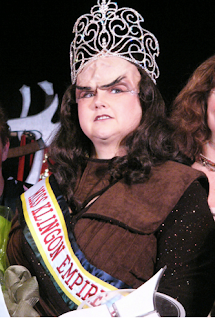 Well, that's rude. I think she's lovely. Anyway, Mila is out and Isaac feels the wrath of the Klingon bat'leth:

First, I have to tell you that I just watched Godspell on Youtube, so don't ever say I haven't suffered for my art. I was not feeling this episode, so I apologize for this pathetic post.

The story: a bunch of overly-dramatic hippies wander the city of New York making outfits out of garbage. But enough about Project Runway All Stars, let's get to the Godspell challenge:

The Parable of the Challenge that Made no Sense:
Therefore whosoever heareth this challenge and understand it, I will liken him unto a wise man, which built his house upon a rock, because, frankly, I don't get it at all. The designers are told to make an outfit for a rich bitch who both hoards her money and also spends it conspicuously at the same time. But the character isn't even rich; it's actually a poor woman who sings one song where she puts on a feather boa and talks like Mae West to dramatise the fact that you shouldn't worship money. So the costume is really supposed to be made up of props that poor people would find in the trash and use to pretend to be rich. Like maybe a ratty fur coat or a tiara made out of tinfoil.

Anyway, the challenge starts with the designers dancing around in a fountain in Central Park while Austin does Kenley's hair and then someone gets baptised and they go to a junk yard to pick out fabric.

Joanna comes in and tells them that it is easier for a camel to enter the kingdom of heaven than for these designers to figure out how to thread a needle. Or something like that.

Then Kenley has her first musical number:

Kenley: "I feel pretty and witty and gay! And I pity anyone who isn't me today!"

Mila: "That is the wrong musical, Kenley. You are so annoying."

And now the parable of the designer who has no friends:

Mila: "Hey! I have friends! I just don't flaunt it, like some people."

Then Austin gets all pissed off at Jerell for stealing his sewing machine:

Austin: "It's like I've been slapped in the face!"

Jerell: "Austin, you should turn the other cheek."

Jerell slaps him on the other cheek. Then they have a laugh and hug it out.

Time for the runway:

Austin and Mondo are the top two:

The Parable of the Prodigal Designer:
So there was this rich guy and he had two sons, Mondo and Austin, and they both got their inheritance of some money and two days to make an outfit. Mondo freaked out and wasted all his time crying about not being able to make anything, while Austin worked steadily on his Marie Antoinette costume. Finally, when Mondo couldn't go on any longer, he made something and sent it down the runway. And his father was so happy about it, he slaughtered a fattened calf and made him the winner of the challenge. And Austin said unto his father, "This blows." And his father said unto him that he had lost a son and now he is returned and they should rejoice. And Austin said, "OK, I'll turn the other cheek." And then Jerell slapped him again.

Kara and Mila are the bottom two designers:

The Parable of the Designer Taken in Adultery:
So there was this grumpy designer named Mila who tried to make an outfit for a rich woman but accidentally made an outfit for a hooker. And the other designers arrested her for adultery because they didn't really know what that meant and then Isaac said unto them, "Let the designer who has not made a garment for a hooker cast the first stone." And the designers saw that he was right and Mila was saved.

So, after a last supper, Kara dies for our sins. Sorry Kara. Even though I didn't like her garments this season, I still thought crucifying her on a chain link fence was a little harsh. Maybe she will be resurrected for another Project Runway series. 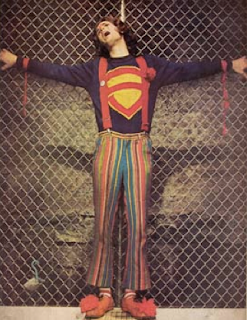 To destroy your enemy you must find him, face him, and then ... become him.

This week, thanks to a revolutionary medical breakthrough, the designers have their faces surgically removed and exchanged with another designer's. It's the only way to accurately judge the best design and prevent a bomb from killing millions of innocent people.

Isaac: "Well, technically, it's not the only way. But it is the most practical."

Good enough for me. So, after the designers pick giant handbags for absolutely no reason at all, they go to the Brother Sewing and Face Transplant Center and get prepped for surgery:

They get $200 and only one day to create looks for a weekend getaway. They get 30 minutes to recover from surgery and for sketching.

In addition to sharing faces, the designers also seem to be sharing brains this week. Mila and Kenley are both making looks for girls attending art festivals. Mondo and Kenley are both using polka dots. Jerell and Michael are making the same coat. Austin and Kara are both making painfully dull outfits. Austin's girl is gardening and Michael's girl is planning to murder her and bury her in her own garden. I'm not exactly sure how that last one is a design concept, but I'm not an expert.

Joanna can sense some tension in the design room:

Joanna: "We're going to do what we do at Marie Claire when there is a tense situation: I invite everyone to complain about one person and then I fire the guest editor. Go."

OK, well, here's what happened: Jerell made a coat and then Michael threw out his first design and made almost the same coat as Jerell. Then he pretended to be shocked when it was pointed out to him, as though he had never noticed the coat being made right next to him.

Michael and Jerell have an awkward meal together:

Jerell: "I am loving this Greek yogurt."

Jerell: "It is Yoplait."

Michael: "But you said it was Greek."

Michael: "So is it Greek or is it Yoplait?"

Michael: "I have never been so confused by yogurt."

Mondo: "This reminds me of family meals at my house."

Michael is mad because Jerell is gossiping about him:

Yeah, we already know you can play like that, dummy. You played like that last week when you were gossiping about Kenley helping Kara.

On to the runway with guest judge Cynthia Rowley:

Austin and Kara both made boring high-waisted pant outfits. Both looks are really awful, but Kara is on the top and Austin is on the bottom.

Kenley and Mondo both made outfits with short-shorts and polka dots. Kenley's was a little baby-blue polka dot jumper and it was super cute, though I'm not convinced anyone would actually wear it. Mondo's look was also nice, but the top was not great and the shorts, while cute, looked like the same shorts he does all the time. The judges' complaint about mixing fifties and eighties references was ridiculous, but I agree that Kenley's was better. Kenley is on the top and Mondo is on the bottom.

Rami and Mila actually made very different looks. I guess they didn't get the memo. Rami made a neon-blue knit jacket with tons of draping and volume in front. Apparently his model got breast augmentation since he last worked with her. That is the only explanation for how he could not have known how awful that would look. But, in case you didn't think she looked top heavy enough already, he also included a second draped sweater in chartreuse under the first one. For the same low, low price. The second sweater had the added benefit of making the model's breasts look droopy and lopsided. Really, the jacket by itself on the mannequin was quite nice. But the combination of two draped sweaters in clashing neon colors on a large-breasted model was really bad. Mila made a color-blocked cape and a skinny pant. It was nice. Mila is on the top and Rami is on the bottom.

Jerell and Michael both made big drapy herringbone coats. They are styled differently, but the silhouettes are very close. Michael's look is very polished and sophisticated, as the judges point out. In fact, it's beautiful. However, it's also kind of boring and predictable. Like most of Michael's designs, it looks like a cliched television version of what a rich woman would wear. Jerell's is much more interesting. Yes, the buttons are insane, but it's a great look. Jerell is on the top and Michael is on the bottom.

Rami and Austin are the bottom two and Rami is out. I really disagreed with this decision at first. I thought Austin's look was much worse and I thought the judges were just keeping him because he's Austin. But the more I look at Rami's outfit the more I hate it. At least you could wear Austin's outfit while you're gardening. At night. When nobody's looking.

Mondo is crying because he disappointed his mother on her 60th birthday by not making a winning outfit or giving her grandchildren. Kenley cheers him up:

Kenley: "Mondo, sure you suck, but not as bad as Austin. HAHAHAHAHAHA." 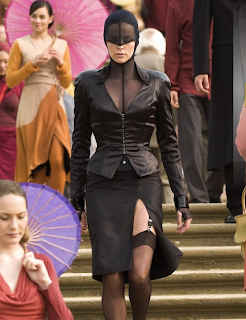