Just a little update on what's been going on with the Erics.

1) Other Eric just got a new Mac so I'll be getting his old Mac and I'll finally be cool and beautiful and popular and smart.

2) Since Santa Clause hasn't responded to my repeated requests, I broke down and used part of my tax refund to buy the outrageously expensive Rosetta Stone program for French. I've taken French since third grade and I'm still pathetic. I can read a little but, as an art historian, I really need to be fluent in at least one foreign language. So I'm giving Rosetta Stone a try. My problem is I hate taking language classes because I'm so shy and insecure I can't relax enough around other people to actually learn anything. And language tapes are so boring I stop listening after a while (also, simple translating is a terrible way to learn a language). Rosetta Stone is like being in an immersion class but without the stress of the other people.

I'm still on level one, which is pretty easy, so I can't tell yet if the program will work. But I can report that it is fun to do, which means I'm actually doing it. That's a major improvement over classes and language tapes. I'm not entirely convinced that the voice-recognition software actually works (and I had to log in as an pre-adolescent boy in order for it to recognise my voice), but, other than that, I really like the program. I'll keep you updated on my progress. Or, as we say in French, "voulez vous couchez avec moi c'est soir?"

3) Eric and I got to see the final three episodes of the excellent show Pushing Daisies yesterday. The show's cancellation was a crime against humanity but it's done and I'll try to stop complaining. The program was part of the Paley Festival and it was held at the historic Cinerama Dome in Hollywood. The creator and some of the cast were there and they gave out "Jews for Cheeses" shirts and there was a raffle with memorabilia from the show:

Man, I was so close to winning that one!

The episodes will air next month and, in case you've forgotten, you will be reminded what a travesty it is that this wonderful show is gone. They do not disappoint. The beautiful sets and costumes, the hilarious dialogue, Kristin singing, it's all in there! And they were able to put together an ending to tie up most of the plots.

It was really fun to watch the shows with an audience. The show doesn't have a laugh track so it's such an interesting experience to watch it with hundreds of enthusiastic people. It was better than most movies we go to see.

Anyway, don't miss the final three episodes next month. If you didn't watch the series, first of all, shame on you; you're the reason it's off the air! I forgive you; just don't let it happen again (for instance, with Mad Men). Secondly, buy the DVDs.
Posted by eric3000 at 12:27 PM 9 comments:

I'm still on blogging break so I'm reposting another gem from the archives. This one is from July 29th 2007. Enjoy! 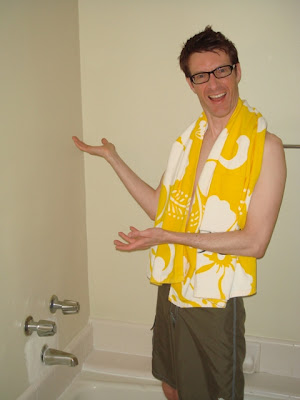 Has this ever happened to you? You go into your bathroom to take a shower but it turns out you only have a bathtub? Well, don't worry; Eric Three Thousand is here to help! Why pay a plumber when you can do a thoroughly unprofessional job yourself? 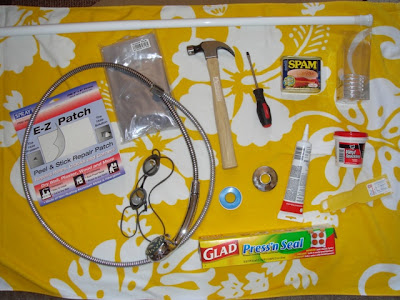 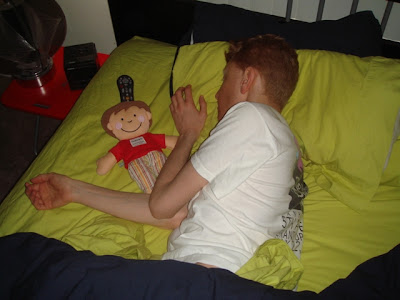 Try to get someone to help you. Oh, forget it; you can do it yourself!
[Just kidding! A big thanks to Other Eric for his amazing photographic work during this shoot!] 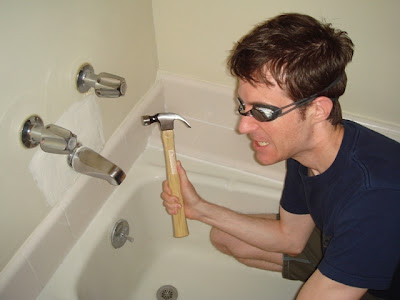 First step: smash a big hole in the wall.
[Hint: you may want to skip this step.] 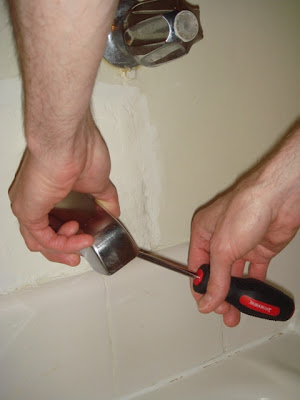 Step 2: Use a screw driver for leverage to unscrew the bath faucet.
Step 3: Patch up any resulting hole with E-Z Patch and putty and let it dry.
Step 4: "Borrow" paint from another unit in your building that is currently being renovated and paint over the putty. This will help keep the putty from melting. 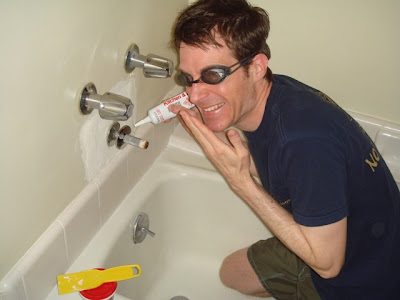 Step 5: Apply the caulk to the ring. Try not to giggle while you are doing this step. 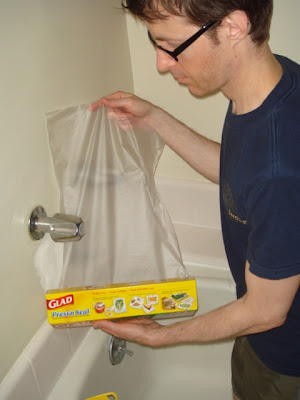 Step 6: After the paint has dried, apply a sheet of Glad Press 'n Seal over the patch.
[This portion of the program has been brought to you by Glad Press 'n Seal]
No, seriously, this will add one more layer of moisture protection. 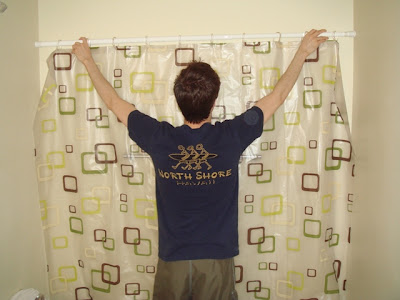 Step 7: Hang the curtains. They will cover all four sides. Cut one of the curtains into two pieces to stretch between the shower rods on the short ends, cutting holes in one to fit over the faucet knobs. 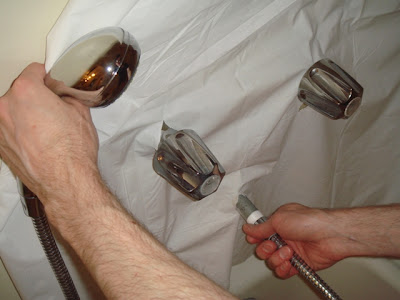 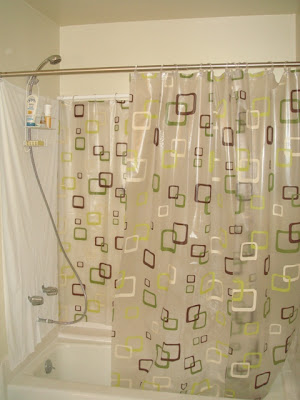 Step 8: Take a shower; you're filthy! 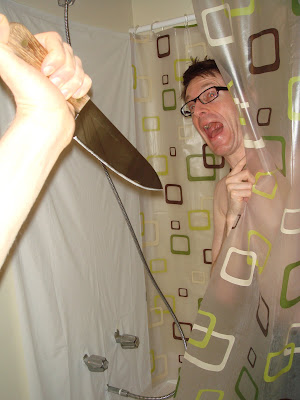 Finally: Do not allow your landlord to see what you have done to the bathroom!
Enjoy!
Posted by eric3000 at 10:20 AM 29 comments: