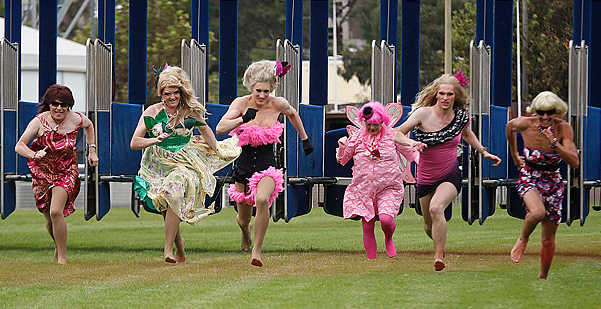 Over these buildings, in these streets, on this stage, on this isle of wonder, Manhattan, a decade of beautiful minds have defined the measure of our planet, and stubbornly propelled our fashion progress toward enlightenment, toward lasting achievement. Here, the location of time's most famous square, we divide the hemispheres into whether you are in or out, set our clocks to an imaginary line, 9:00 P.M. Eastern Time, measured in Greenwich Village. but the laws of relativity, not Newton's, apply to a designer's pursuit, an inescapable eternity of repetition, hours, days, years, from margins calculated by inches, centimeters, decimal points, for the promise of moments everlasting. Even when motion is all but frozen, we may still doubt what we see. Two and a half pleats, an asymmetrical hem, a dart slicing two feet, to find a target two and a half inches in diameter.

And as the competition returns to Parsons for the ninth time in the modern era, the Project Runway theatre will entertain us with a Shakespearian swoop, with effusive, fast emerging designers, honor students with soaring expectations, with a mature feminist who refuses to take the advice of her mentor, a girl trying to recover from a debilitating glue-gun accident, and several disasterous experiments with cotton-candy; on heels, on water, in mid-air, Parsons' lions will be tracked by the lens of a media microscope, where advantage is defined by hundredths of a second. And in design's greatest rivalry, the ultimate competitor, Gunnar, collides with the raw commitment and zen-like cool of Christofur, who soon could be the most decorated designer of this season.

Here, where monuments were built in an age of mythology, where for ten years a ceremony of keys nightly locks the prisoners in the Atlas tower, here, where fairytales never end, and a group of designers, indomitable, sustain the flame of fashion. Here on the isle of wonder we'll hear again the echos of an ancient ethos: faster, tighter, shorter. Ocius, adstringo, brevis. How fast, how tight, how short, can we extend the very measure of a garment, before slipping into hooker territory? Theirs is a pursuit of timeless achievement, be it astonishing ... magnificent ... everlasting.

Bob Costas: "Parsons, five hundred years ago the residence of Henry VIII. Now, on a Thursday in the summer of 2012 it's where the Project Runway torch began the final leg in the journey that started by tradition in New Jersey, and today the torch continues along the Hudson River, through Lower Manhattan, and east to Dylan's Candy Bar, where, with 15 designers from about five countries, the flame will be lit again and Queen Elizabeth will declare open the second episode of the tenth season of Project Runway. Historic Brooklyn Bridge is adorned with the Project Runway logo for all the city and the world to see, and Kenneth Branaugh is dressed, if I'm not completely mistaken, as Abraham Lincoln. Hi, everybody, I'm Bob Costas and I think you'll agree that my hair is almost a color that can be found in nature."

His hair does look better than usual. Now, before we start, I have to tell you that due to weather conditions, you have been provided with a poncho to wear. Please don't use umbrellas in your house; it will affect your viewing experience and it is also bad luck. Thank you. This week's episode will be produced by famed director Danny Boyle:

Meredith Vieira: "I asked my dear friend Danny Boyle about the challenge of producing this episode of Project Runway. He knows he can't compete with last week's over-the-top episode in Times Square, so tonight you are going to see something more cinematic, a mix of live action and short films. In other words, it's going to be cheap. But Danny said he was feeling very confident."

Michael Kors: "Is it confidence or arrogance?"

Meredith Vieira: "Wow, that is simple."

The episode starts with the designers meeting Ralph Lauren's daughter at her candy store, where you can get a bag of jelly beans for the low low price of $500.

Dylan Lauren: "And all this controversy about my jelly beans being manufactured in China is totally overblown. We're living in a global economy, people! The important thing is that I'm really, really rich."

Look, I'm not judging. Time for the Parade of Nations!

Bob Costas: "Just a reminder: the models will be walking the runway in alphabetical order, based on the Pig Latin form of their names."

Yes, Bob, everyone knows that. Here are some of the comments Bob makes as the designers walk into the Parsons stadium:

Bob Costas: "First up is Gunnar, with a black and white peplum dress made of liccorice. Interesting fact about Gunnar: like most of the competitors tonight, he has never won a challenge, yet he still thinks he is hot shit."

"Sonjia created a pretty blue number out of jelly beans and gummy sharks. This tiny land-locked designer usually does better in winter sports."

"Melissa created a terrific leather-look outfit from licorrice. The king of her country offered untold riches to anyone who brought home a gold."

"Nathan made a really heavy skirt that looks like a giant lampshade. Nathan is the defending table-tennis champion in his parents' basement."

"Andrea made a candy-button apron with an umbrella-fabric bustle. There are four countries sending women to the competition for the first time."

"Alicia made an asymmetrical romper. You can always recognize Team Bermuda because of their shorts."

"Elena has never won a medal in badminton."

"Fabio was suspended from competition for five years because he accidentally took cold medication. Fortunately, the verdict was overturned on appeal and here he is. I made up that story, but that doesn't make it any less interesting."

"Dmitry is representing the country of Belarus. 97% of Americans do not know that county exists."

"Kooan is representing Japan. Japan is not walking together with North Korea this year. Or any other year. Just thought I'd mention it."

"Christofur made a nice dress that looks beaded. He was going for his second gold medal, but he didn't get it."

"Raul created a pretty blue top, but the skirt is ugly. Kim Jong Il is supposed to have shot seven holes-in-one the very first time he ever played golf. That's a lie and I'm not afraid to say it."

"Lantie was going to open a shop, but then the market for shops crashed. So it's just bad timing that has kept her from being a really successful shop owner. It has nothing to do with the fact that she can't design clothes. Lantie made a dress out of an umbrella and she is out."

"Ven made a pretty dress that looks like a stained-glass window. He wins the competition and sticks his flag in Glastonbury Tor. Tor is an ancient Celtic word that means 'the cattle are dying.' Stay tuned for Paul McCartney!"

OK, I'm sorry but I just don't have time to fart around this season, so here's what's gonna happen: I'm going to make some hilarious comment like "I guess I picked the wrong week to quit sniffing glue" or maybe a timely reference to the "Charley bit my finger" video, then I'll tell you who won and lost this week's challenge, which you will already know anyway, and then we can all go home and get some sleep. Sound like a plan?

Oh, alright. Fine. Let's talk about what we saw. First the commercials, which are usually the best part of the show. So, you know when you're nude modeling and then the woman who is painting your portrait notices that you have toenail fungus? Yeah, it's really embarrassing. Fortunately, a company has developed a new product specifically for nude modeling toenail fungus. Problem solved!. But now we have an even bigger problem:

OH, MY GOD, NO SHE ISN'T! Why would you even say that?

OK, on to the designers. You call these All Stars? I've never even seen these people before!

Gunnar: "You've seen me before, girlfriend. And I'm a huge star!"

Well, yeah, I guess I do remember Gunnar. But, seriously, this season of All Stars is even worse than last season."

Heidi: "This isn't All Stars, you dumb-ass. It's just the regular season. Now, watch this fascinating clip about my photo shoot posing with a bunch of scissors. It's from an eight-part documentary miniseries produced by Ken Burns for PBS. I think you'll learn a lot about how amazing it is to be me."

I smell an Emmy.

So, first we have the Road to the Runway, which was OK. Zanna Roberts Rassi tells us that there were moments of comedy during the audition process. I think they went something like this:

That never gets old. Then Zanna does one of her famous five-second interviews:

Zanna: "Thank you so much for being here, Anya."

That was fun. So, in between the segments where we meet the new designers and the segments where they show their racks of clothes to the judges, we also get these really annoying segments with Nick and Mondo bickering and telling us how great all these designer are:

Wow, Nick, that was so insightful.

Anyway, back to meeting the designers. So, yeah, we have Gunnar. And then we also have his arch enemy/best friend/who gives a crap Christofur (I spelled it that way because he really likes fur. Isn't that clever?) These two are going to get into some serious catfights: 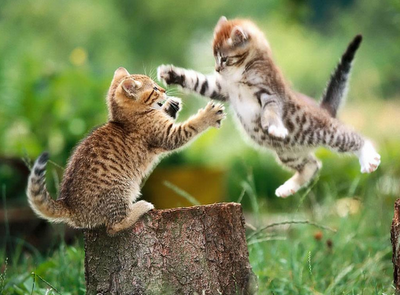 By the way, I don't know if anyone has ever noticed, but there are some really cute pictures of cats on the Internet.

And speaking of cats, we have Andrea, a genuine radical feminazi and reluctant cat lady. Love her!

We also have Dmitri, who is from Belarus and looks very familiar, for some reason. Does that count as being an All Star?

Heidi: "Will you shut up already about the All Stars?"

Fine. Lantie likes to stick a lot of crap on her dresses. I'm already not a fan.

Sonjia can make clothes out of an old couch. So that's pretty cool, right?

Elena makes really great clothes. But I'm not convinced they aren't just copies of costumes from video games or cartoons. I don't play video games, but I have seen Aeon Flux.

Beatrice lives in Los Angeles. Judging from the footage they are showing us, she apparently lives on a boat. She is also the first person to ever work her way through college.

Kooan is from Japan. He's a puzzle. There is a fine line between crazy-fun and ugly-for-the-sake-of attention-seeking. I'm willing to give him a chance, though.

Buffi tells us the exciting news that we can, in fact, mix prints! So, yay!

Fabio has lots of hats and empty picture frames and he's a freegan, which is a real thing.

Alicia makes clothes for lesbians, so I'm pretty much in love with her.

Melissa lives in a flat because apartments are just not Gothic enough for her.

Raul. I don't know what to say about Raul.

So, they are celebrating the ten year anniversary of Project Runway. For this challenge, the designers were told to send in a look they made at home. Then they have one day and $100 to make a second look that relates to the first look. The runway show is in front of a huge crowd in Times Square, which is pretty exciting.

Because it's in your contract.

Sorry, I think I make you tell that joke every season.

Patricia Field and Lauren Graham are the guest judges. Christofur wins and Beatrice is out. And that's it.

Oh, I forgot to talk about the clothes. Well, some of the garments the designers sent in were pretty good, but pretty much everything actually made during the challenge was garbage: