Yes, this is the final challenge before Fashion Week. Except that Fashion Week already happened. For some reason Bravo decided to mess up the schedule even more than usual this time by sending five designers to Bryant Park with, presumably, two decoy collections because we hear in the previews that two designers will be out this week. Well, I'm sure by the end of this episode everything will be clear.

We start the episode with Sweet P telling us she can't believe she's still there:

Seriously, I can't believe she's still there! And no one can claim it's some sort of Wendy Pepper/Santino Rice deal where the producers are supposedly keeping someone around for drama; she's there through pure, dumb luck. Don't get me wrong; I think she's talented and she's made some really cute dresses; but she often doesn't seem to know what she's doing and she's messed up and been in the bottom two so many times that she's really lucky to still be there.

Sweet P: "Yeah, I know! What the hell am I still doing here?"

The other designers are freaking out:

Chris: "I'm not freaking out. Wake me up when it's over."

God, I love Chris! Is it possible that he's getting larger over the course of the season? It's like Hurley on Lost; how can he be gaining weight when all they have to eat are mangoes and fish?

Chris: "I have a secret stash of peanut butter and potato chips that fell out of the sky."

Oh. OK, so Amanda is out and the designers have to go on one last field trip:

Designers: "Oh, god; another one? Are we there yet?"

Tim: "Don't make me turn this show around and drive back to Parsons!"

This field trip is actually a pretty good one. Tim takes them to the Metropolitan Museum of Art!

But Project Runway fans would love that and we're not all lucky enough to live in New York!

Tim: "Well, get off your ass and come to New York if you want to see it that badly!"

Fine. What boring old art did you bring us here to see?

Oh, that will be nice.

Tim: "So, designers, fashion has been inspiring art since the beginning of time. For this challenge you will have to find a work of art that has been inspired by your designs."

Rami: "Oh, that's easy! The Greeks were totally stealing my style! Did I mention that I designed a dress for Aphrodite once? It got her into the top ten list of the best dressed Olympian gods."

Yeah, whatever. The designers also get to visit the temple of Dendur:

None of the designers choose anything from the Egyptian galleries so they go on to the European paintings. The designers manage to find paintings with clothes that look just like their own designs.

So their inspiration choices are not that inspiring but at least they get a private viewing at the Met, which is pretty cool:

Sweet P: "I probably could have touched a painting."

I think they have motion sensors. Anyway, here's what they chose to work with: 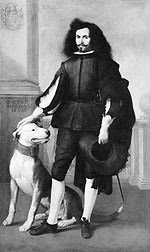 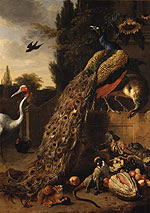 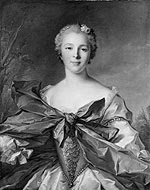 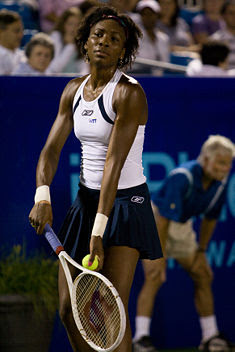 Rami: Venus (sorry, I can't find the sculpture of Aphrodite on the Met website; it's a second century B.C. copy after Praxiteles or something like that. The important thing is that it has a lot of draping.)

Now that they've found the art that looks like something they would have made anyway, it's time to get to work. They have two days and $300. Get going!

Rami: "I'm not here to make noise. I don't want to wake Chris; he looks so sweet when he's sleeping."

As usual, an argument about nothing breaks out in the design room:

Jillian: "How could you say such a horrible thing?"

And then they are friends again in the next scene.

Rami: "I'm still not making noise. I don't think it is necessary to be loud. I don't see why I can't just keep making totally boring dresses. It's what I do."

Christian: "And that doesn't include the amuse bouche and desert."

Tim makes his rounds, telling Christian he thinks the cloak is an obfuscation:

Christian: "Isn't that the point of a cloak?"

Tim tells Rami his dress is stunning and he's going to piss off Nina:

Sweet P's dress is supposed to look like a peacock and it looks like kind of a mess but we don't get to see it very well, which makes me think it's going to be OK.

America picks Jillian as the best dressed designer on the show. Duh.

Sweet P's model, Lee finally shows up and starts waving her arms around, putting a voodoo curse on Sweet P:

It's not working. Jillian is still steaming pleats. She tries steaming right on her model. I'm pretty sure you can't do that:

Let me put it another way: I'm pretty sure you can't do that without burning your model.

Jillian: "Sorry. Hey, you're thin enough to fit through the sewing machine, right?"

The guest judge this week is Roberto Cavalli.

Christian's look is pretty great, as usual. Sure it looks like a Christian design but it not the exact same look and he really went all out, what with all the obfuscation and everything:

Michael: "It's a little Brenda Vaccaro in Zoro the Gay Blade."

I think he likes it! Christian wins (I think)! Congratulations, Christian (if I'm remembering correctly)!

Jillian's look is pretty great, too! I can see why she isn't thrilled with the skirt but I think the overall look is a success. There is definitely a medieval knight vibe to it but it still looks wearable. It's an updated Joan of Arc:

Michael: "How about it's a little Joan Van Ark in Dallas?"

Nina: "That's hilarious, Michael. But if you do your "it's a little someone in some TV show" one more time I'm going to hit you in the face."

Sweet P's Amazing Technicolor Dream Dress is, as expected, much better than we would have thought from the shots in the design room. Again, it's a nice dress. The judges think she has a real talent for ready-to-wear. But the dress just wasn't exciting enough for this challenge. Sweet P is out. As everyone knows, she is going to Bryant Park anyway. Sorry and congratulations, Sweet P!

Chris and Rami both made really beautiful dresses that were also really disappointing. We've seen them before. On this show. This season.

Rami made another Rami dress of purple draping. I thought it was gorgeous. I think it was the best Rami dress that Rami has made so far. But it was still the exact same thing he's been making all season and the judges have told him over and over that they want to see something different. If he doesn't care what the judges think, he's not going to win this show.

Chris also made a beautiful dress that looked way too similar to the one he and Christian made for the avant-garde challenge. I don't understand why he did that.

Roberto Cavalli, of course, is not aware of how derivative the design is. He thinks Chris's is the best design for this challenge. This makes me think Rami will be out. But the other judges ignore him and decide that Rami and Chris were equal in this challenge and therefore will be competing for the third spot at Fashion Week. They will both make collections and one will be chosen to compete in the final right before the show.

So that's the hook this time. Five collections, one real decoy, and a second decoy to be determined at the last minute. They could have just had four collections in the final, like they did last time. But they had to shake things up. Woohoo!
Posted by eric3000 at 10:36 AM

Christian: "And that doesn't include the amuse bouche and desert."
Hah...(can you believe it is time for Top Chef again)

A thin model through the sewing machine. What a great comic strip.

I think I pick Christian for the win. It sure seems how the wind is blowing. They better put some weights on him if he does....or we will have another hot air balloon accident.

On obfuscation being the point of a cape: Too bad Christian didn't make that reply on the show, it was pretty funny!
I thought Christian's garment was more costume than fashion, but whatever. It's just entertainment.

(mind you I am not for Christian for the win...just saying I can see they love his stuff)

I can't really say I care who wins this.

Ho hum, yawn, been there, seen that, let's move on. I'm with Chris. Let's take a nap and catch up on some beauty sleep.

In fact, for the first time in a long while I did not bother to write a recap. What was the point? Everyone designed something they'd made before. Now, if Bravo had forced the designers to hand over their photo and materials to the person standing next to them, I might have sat up and taken notice. Be that as it may, your recap was (once again) better than the show. Great job, Eric!!

Obfuscation = the point of a cloak. Now that's brilliant! Can you have imagined Tim's face if Chris had responded with that? He would have out-Timmed Tim on the linguistics.

I agree with Ms. Place - your recaps are way more entertaining that the show.

Now, if Bravo had forced the designers to hand over their photo and materials to the person standing next to them, I might have sat up and taken notice.

You're right, that would've been awesome!

You are the be-all end-all recapper of all time forever ad finitum ad nauseum. *giggle*

Seriously though, you are soooo funny. I will miss your PR recaps when the season's over.

I think Christian will win it all, Jack will win the $10,000 fan favorite, that Andy Cohen will say something to piss me off on the reunion show as always, and you'll write posts that will make people at Barnes and Noble look at me strange because I'm LMAO as always.