Project Runway Season Nine, Episode 8: How Does She Do It?

Eric3000 is brought to you this week by the wacky new comedy starring Sarah Jessica Parker. She plays a woman who literally juggles her children's toys and her blackberry. It's a very subtle metaphor referring to how the modern woman has to juggle family and career. Have you ever heard of anything so crazy? Well, welcome to the 1970s!

Heidi Klum: "I just have to say that I have approximately eight children and I also run a multi-billion-dollar media empire. It's not that hard."

Anyway, last week Anya won and Becky went home. Bryce is convinced he is next to be out and he sets out to fulfill the prophecy. Josh decides to try to be nice this episode, so the producers need to find a new villain:

Olivier: "I think all women should be forced to have radical double mastectomies so I can design flat clothes."

Oh, my goodness! How could he say such a horrible thing? Oh, that's right, he didn't. Unfortunately for the producers, Olivier is just too helpless and weird to be turned into a villain. At worst, he's slightly annoying. And even then, I can't take anything he says seriously.

Heidi: "So, yeah, this challenge is all about the boobage. Major boobage."

Apparently these designers do not like the boobage. I think they need to get over that, as they will be encountering breasts from time to time in the fashion industry.

Heidi: "And here are the boobs now!"

A group of men walk out on stage.

Heidi: "I'm just kidding! They are all really nice guys! You will be designing for their wives and girlfriends. Some of the wives have never met their husband's girlfriends before, so this should be exciting!"

The men are picked in reverse order by weight. The men then tell the designers everything they know about their wives and girlfriends:

Men: "They have breasts."

Really. That appears to be the only thing they know.

Men: "No, you don't understand. We really like breasts."

Got it. Straight men really like breasts. Let me just write that down so I don't forget.

But, seriously, the designers need a little more to go on:

Viktor: "So, if your wife went shopping at a store, what store would it be?"

Client: "Hmmm . . . she must shop for clothes, right? I do notice that she isn't naked all the time."

Some of the men do have a few suggestions:

Josh: "Oh, don't worry, honey. It will be simply fabulous!"

Bryce's client wants something girlie and pink and is so in love it makes Bryce physically ill:

Bryce: "He's so in love. I just want to punch him in the face. It's rude to talk about how in love you are when you are around someone who might be missing his boyfriend. I just want to go home."

And so it shall be!

Anthony Ryan's client wants a red dress to replace the one he accidentally set on fire:

Anthony Ryan: "You know what? I just remembered; it doesn't matter anyway because I'm colorblind!" 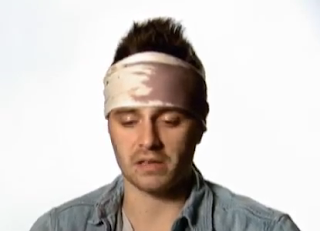 We don't actually witness the beating that follows, but we do see the resulting head wound.

Bryce buys a terrible pink fabric and then dyes it a nice fuchsia. He and Viktor then perform their favorite scene from Steel Magnolias:

Bryce: "Pink is my signature color."

Viktor: "That dress looks like it's been hosed down with Pepto-Bismol."

Bryce then has a baby and dies. Oh, did I give away the ending? Sorry.

Olivier is having trouble with his model. Mainly because she is not a cardboard cutout and she has working vocal chords:

On to the runway with guest judge Malin Akerman. You remember her. She was in that movie? Yeah, I didn't see it either.

Laura made a hideous teal gown.

Anthony made a terrible red and black dress that was a cross between a cheerleader and superhero costume.

Bert made a boring/tacky dress.

Bryce made a hot pink mess/dress. It would have been really cute if it had fit properly and he had simplified the back and the hem. The pockets were actually a nice design detail, although the fact that his model thought she was going to put her keys and phone in there was pretty scary.

Kimberly made a dress with a black skirt and purple top. It was OK.

Olivier made a blue trouser and beige top that looked pretty good.

Anya made a ridiculous black-and-white print gown. I did not like this dress. The whole thing looked like an accident and the detail on the hem was awful. I don't know what the judges found so original about a skirt that is floor-length in back and coochie-length in front; we've seen that many times before and it always looks just as stupid. Nobody should wear that dress to a gallery opening. I can, however, imagine someone with bad taste wearing it on the red carpet. And I'm looking forward to that.

Viktor made a very cute retro/funky skirt and top that is exactly what his client was already wearing. I thought it was the clear winner, but he also had the least challenging clients. The judges make weird comments to justify not giving him the win:

Michael: "Yeah. Why would a woman need sunglasses and a purse?"

Oh, I don't know, maybe because it's sunny and she needs somewhere to carry her credit card and lip gloss?

Heidi: "Just hire someone to carry that for you."

Anyway, Josh wins for his pretty if unexciting black cocktail dress. Bryce is going home to listen to Lady Gaga until he creates an amazing collection. Even Lady Gaga couldn't survive listening to that much Lady Gaga. I'm scared for him.

Oh, and I rather loved Anya's dress. But what do I know?

Cliff O'Neill said...
This comment has been removed by the author.
8:18 PM

Cliff, don't worry; the judges also loved Anya's terrible dress, so you are in good company! Sort of.

Oliver: "I do not want my clients to talk. I do not want to see my clients. I design for fashion, not people. I cannot believe she has breasts. She is fat. Is she talking? Make her stop."

No, Oliver, that's not weird.

That Bert was on best behavior in this one, and thank god Olivieiri behaved like a total dipshit so we weren't forced to listen to Josh's hysterics for the whole hour.

I also thought Anya's dress was hideous, and THANK YOU, Eric3000, for pointing out some of its many flaws.

I do have to say that it was awfully depressing to watch these oafish men drool and giggle and say "BOOBIES" while the designers either tittered encouragingly (Anya) or were horrified at the "fat" unwieldy women who dared disrupt fashion by having breasts. Kind of an awful glimpse of the mindset of at least one corner of the fashion world - and I've seen enough photos of runway shows now to know that PR contestants aren't the only ones who prefer to design for utterly flat figures.

"Nobody should wear that dress to a gallery opening. I can, however, imagine someone with bad taste wearing it on the red carpet. And I'm looking forward to that." Priceless

The boob fetish was pathetic.

My neighbor on the other side of a thin apartment wall came over to see if I was ok - she thought she heard me crying. No, I was hysterically laughing from reading this post. What truly did me in was Anthony Ryan determining the perfect shade of red... before remembering he's color-blind.

You ought to get paid for this, y'know? (well, no, not by me, but by someone who has, like money.)

Ha ha, yeah I'm still waiting for someone rich to pay me for this!

Still bored by the show, but not your posts Eric! Laughed at the observation that a purse and sunglasses are actually needed at the same time. In fact, pretty much all the time if you ask me. But the judges didn't ask me. Why don't they ever ask me? Clearly producer manipulation to give Miss More is More the win once again. Sigh.

Now I must go watch Steel Magnolias again for the gazillionth time. Pink is also my signature color, by the way.

Lmfao @ "lovemesomenobody", I love it!

I've missed commenting on this blog. This season hasn't been inspiring to me whatsoever, with the exception of Viktor, who's been lingering as and now cemented as permanent favorite. <3 As far as I can see, he's the only one with a vision and clear POV. Anya definitely has her aesthetic identity, but to me she's just Caribbean Uli. I miss Uli. Anyway....

Can't wait for the Episode 9 recap! Now I should actually, ya know, read the previous 8 episodes I've missed. Life is so exhausting.