Yeesh. I don't even know where to start. I'm sure it seemed like a good idea at the time:

"Hey, guys! Let's start a band! Maybe we'll get on the cover of Rolling Stone!"

"But what if we have to wear really shitty clothes?"

"Why would Rolling Stone do that to us?"

Yeah, I don't think anyone has an answer to that question.


So, this challenge should have been fun. The designers were supposed to do a makeover for the members of a new band. That's usually more of a job for a stylist than a designer, but some bands get custom-designed clothes, so it could have worked. Unfortunately, the results were spectacularly awful. And not in a good way. The designers managed to make clothes that were almost breathtakingly bad and yet at the same time so boring I have nothing to say about them.
First, let's get to all the drama, since that's why we all watch. Oh, what's that you say? You don't watch for the drama? You watch for the fashion? Well, too bad for you, because this episode didn't have either.
Remember at the beginning of the season when there were way too many menswear designers? Guess what? Now nobody does menswear! Even the menswear designers can't do menswear!
Olivier: "I can do menswear. But only on a mannequin. And only if the mannequin is very, very quiet."
Yeah, sometimes the little wheels on the bottom squeak.
Olivier: "Oh, my god, I hate that."
Anyway, the designers are split into two teams of four, but it doesn't really matter, because they will be creating completely independent looks. One person from each four-person team will be creating an individual look for one of the four members of the band. So each band member gets two looks. Don't worry, I checked the math and it does work out.
The producers showed the designers all getting along really well together. Which made me wonder who these new producers are and what they did with our old producers. The designers are all in a giving mood. Bert gives money to Laura, Anya gives fabric to Kimberly, and Joshua gives everyone crabs. It's touching, really.
Well, we're going to have to discuss the clothes at some point, so let's get it over with. The band performs and the guest judge is Adam Lambert:

So, guys, what do you think of your new look? 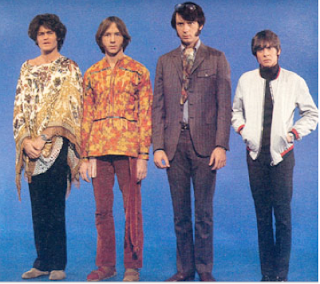 Guys: "We love it. We wish there were more sequins. Can we have our recording contract now please?"

In a minute. First we have to critique the individual looks: 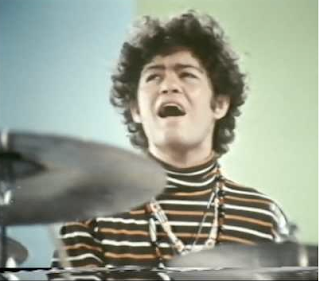 Michael: "Those horizontal stripes aren't working. No man on earth wants to wear something that makes him look wider."

Heidi: "He is really rocking that Garnier Fructis, though." 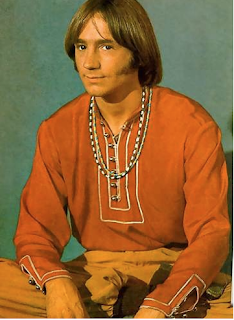 Peter (By Anya and Kimberly)
Nina: "It looks like a woman's blouse."

Michael: "It's Peter Brady at a harvest festival."

Adam Lambert: "I think it's very dash-chic-y! Get it? Dash-chic-y?" 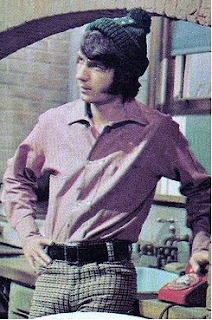 Michael (By Bert and Olivier)
Nina: "I like this look."

Michael: "Who knew Bert had a rocker's soul?"

Adam Lambert: "I would totally wear this on the red carpet." 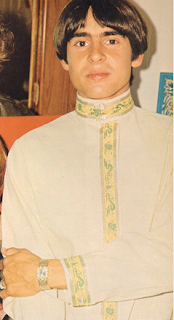 Davy (By Laura and Viktor)
Nina: "It looks like a woman's blouse."

Michael: "You think everything looks like a woman's blouse."

Nina: "Well, at least I don't say everything looks like a Golden Girls Brady Bunch hooker."

And now I'm done with those awful clothes. Viktor wins and Olivier is out.

Nothing. Will ever. Be the same. Again. This Sunday. The lies. The betrayals. The season finale of Drop Dead Diva.

Thanks, Cliff! Oh, my god, you have no idea the meltdown I had trying to put up those pictures! I am so technically challenged! Ha ha!

Olivier: "I can do menswear. But only on a mannequin. And only if the mannequin is very, very quiet."

This recap belongs in the "Eric3000 Hall of Fame" . I think your mother should print and scrapbook these. You are definitely a savant of sorts. I agree with a previous weeks poster....you should be paid for your humor.

Anya's split pants and sorry shirt....geesh . I think they judge her on the clothes she wears. I love most of what she wears and I imagine she made most of her outfits or she shops at "Anyas-r-Us"

you are just too much.

I love you, and what is the deal with your last name? Are you any relation to MaxMillion Twentyfive or his brother Nicholas, who went to school with my kids?

Thanks, Laura and Monica!

Catherine, are you asking about the name 3000 (which I had to spell out for my domain)? I took my husband's name, Outkast's Andre 3000. We were married in a secret ceremony. So secret even he doesn't know about it. I knew the marriage wouldn't last, but I kept the name.

Brilliant. But I wish you had tackled the Laura Factor. Not only did she overspend and then have to take money from Bert, but she continued to trash him in the confessionals and ultimately produced a garment that looked like a repurposed butcher's apron.

As Kors said: Sweeney Todd, although my reference is the Barber sketch from Monty Python.

True perfection with the Monkees. But my favorite line was re: Olivier's Mannequin:

Yeah, sometimes the little wheels on the bottom squeak.

"Are you some kind of idiot savant with an exceedingly specific focus on Monkees fashion?"

I hope that somewhere in this world there IS an idiot savant with an exceedingly specific focus on Monkees fashion.

This was possibly the worst episode of PR ever made. Ditto the clothing: worst ever.
I hope the "Sheepdogs" are actually just some actors hired by Bunim/Murray and not an actual band with actual feelings and interests. Because otherwise: HOW COULD YOU DO THIS TO REAL PEOPLE? HOW?

Love me some Monkees! Thanks for that, as there was really nothing at all interesting about the ep other than the delicious Adam Lambert. I pretty much fell asleep. Some kind of swirling colors, acid trip, magic locket, Sunshine Day. I can't seem to remember.

Boy, that episode was terrible, but we'll get through this together!

I loved the Monkees. And they were dressed better than the designers dressed those poor musicians.

Your recap was way better than the episode :).

I no longer watch Project Runway. I just wait for your recaps - they're so much better than the real thing!