Project Runway All Stars, episode nine: You light up my life. Sort of.

Let's get right to the challenge. Isaac comes out on stage wearing kind of an ugly skirt, but then he snaps his fingers and the studio goes dark and suddenly he lights up like Times Square on an acid trip:

Yes. The challenge this week is to make an avant garde look that lights up and/or glows in the dark:

Joanna: "But, tell us, Isaac, what does avant garde mean?"

Isaac: "I'm glad you asked. It means something new."

Joanna: "Does it have to look like something that would be worn in outer space?"

Joanna: "But surely it has to be costumey and completely unwearable, right?"

Isaac: "Are you trying to drive me crazy, Joanna? It just has to be something we haven't seen before. It has to be new. That's it. End of story. DO YOU UNDERSTAND THE WORDS THAT ARE COMING OUT OF MY MOUTH?"

Joanna: "Alright. No need to get upset. I was just asking."

Can we get to the challenge?

He has had all his skin replaced with the finest Corinthian leather.
He once had a wardrobe malfunction and people were outraged because they missed it.
Downton Abbey was based on his life.
He IS the most interesting man in the world.

Wow, that is pretty impressive, but...

Wrestling alligators doesn't excite him. He only does it to give the alligators some exercise.
When his momma sits around the house, she uses a comfortable chair.
Siri asks him for directions.
He IS the most interesting man in the world.

Oh, I didn't realize there was more of...

He has won seven Academy Awards, despite the fact that he has never been nominated.
His tears taste like Mountain Dew and contain even more caffeine.
The price of gold is tied to his body mass index.
He IS the most interesting man in the world.

Are we done now?

Isaac: "Yes, that's right! The guest judge this week is Pharrell Williams and the winner of the challenge will have his (or, less likely, her) design worn by one of Pharrell's artists. Apparently he owns some artists."

Supercool. OK, so the designers go to some weird lighting store and Austin asks the question on everyone's mind:

Austin: "Where do you keep your blue barrettes?"

Well, let's see ... have you tried looking in the barrette aisle?

Same old, same old in the design room this week. Mondo complains about Austin being high maintenance, while working on a Tron Teletubby costume. Michael makes several outfits and then picks the worst one. Jerell finds increasingly hilarious ways to tell us how amazing he is. And Kenley laughs through the pain, while everyone is being a total bitch to her.

Let's get to the runway, with guest judge Pharrell Williams:

Isaac: "He was named Best Dressed Man in the world."

Will you please stop?

Isaac: "No, that one is true. Also, whenever he is asked how many blonds it takes to screw in a light bulb, he always says, 'One,' because he only has the highest respect for women."

Oh, for crying out loud.

Anyway, There is one amazing look on the runway this week, a couple of OK looks, and a couple of duds.

Kenley knocked it out of the park this week. I loved the glowing jacket you could see through to the plaid dress underneath; the styling worked; she made her usual dress, but turned it into a completely different look with the jacket; she managed to add volume on the top and bottom and still have it work; it was almost -- dare I say it? -- avant garde.

Austin's look was very pretty. I really liked it. It was dramatic and made good use of the lights. But it was not even remotely avant garde. Austin won. Very annoying.

Isaac: "Tell me about it. I thought Kenley should have won, too. Unfortunately, I work with a bunch of morons."

Yeah, I guess I should be used to it. So, Mondo is in the middle. His look was fine. Jerell and Michael created looks that were almost good, but they managed to mess them up.

Michael made a ninja outfit and then just wrapped it in glow tape. At first it was striking, and then you realized how badly made it was. And it seemed like the glow tape was an afterthought that had nothing to do with the design. The blinking lights were terrible. I would have sent him home for this.

But I can't blame the judges for sending home Jerell. His look was also bad. But if he hadn't added that awful black maxi-skirt, I think I would have really liked it. The pannier skirt was pretty. But, as usual, everything about the styling was horrid. Jerell is out. Sorry Jerell. 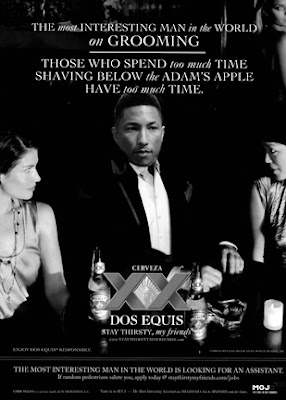 Yeah, what's so great about Pharrell? I honestly don't know what the fuss about him is all about. Guess I'm just old and out of touch.

Oh, and "Jerell finds increasingly hilarious ways to tell us how amazing he is." Haha! Don't know how many ways I can say I am glad they finally got rid of him. Of course, Mila and Rami went before him, and I'm still bitter about that.

My favorite this week was Austin. Miss Scarlett redeemed herself after last week's disaster. I don't really give a squat if it was avant garde as the judges always totally ignore that and don't even know what it means anyway.

Well, it's certainly the best thing Austin has done all season. I'll give him that much. Haha!

That was riotously funny, E!

And I certainly wouldn't have pegged the best dressed man in the world to be wearing a t-shirt and a trucker cap. Really.

I had low expectations for this episode. But I was pleasantly surprised. Most of them did a respectable job considering how corny the challenge was.
Kenley was my pick for the win. The poor girl can't catch a break though. Austins was good too. Mondo's was half hearted. Jerrel's was pretty good too considering what he has been doing all season. Michael's looked like a combination of Kenley's Godspell coat and Rami's party store jacket. Except badly sewn and taped. He was my pick for the auf.