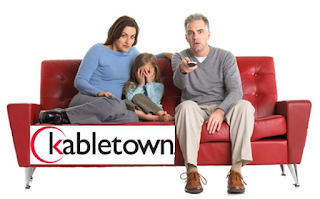 OK, so that wasn't so bad. Why the hell did Lifetime try to scare us away by excessively promoting the teams aspect of this new season?

Heidi: "Let me explain. Since NBC/Universal and it's parent company, Sheinhardt Wigs, sold our show to Kabletown, the quality has really gone downhill. We decided there was only one way to save Project Runway: we need to get Kabletown to sell the show so we can take back control."

Tim: "That's right. We realized the only way to save Project Runway is to tank it!"

It all makes sense now. How long has this been going on? Six or seven seasons?

Heidi: "Uh ... yes, that's it. The show has been terrible for years on purpose. We've been planning this for a long time."

Tim: "Heidi and I teamed up to bring down the show. We thought long and hard about what viewers hate most about Project Runway and it was pretty clear that everyone hates team challenges more than anything. So we turned it into an entire season!"

You two are evil geniuses! It was hard to imagine how the show could have gotten any worse, but you figured out a way! There is only one small problem: the teams gimmick doesn't seem to have anything to do with what we think of as team challenges, in which designers have to work together on shared looks or collections. Here the concept is mainly related to how the judging is conducted and it gives the designers a small incentive to help each other. I actually liked it.

Heidi: "Well, keep that to yourself. We're hoping just the threat of team challenges will be enough to drive viewers away. It doesn't really matter that the show isn't as awful as you were expecting it to be."

Don't worry, your secret is safe with me. The only thing that gets fewer viewers than Project Runway is my blog.

The challenge this week was to be inspired by New York City. Most of the designers come up with the brilliant idea of making something "architectural" because, you know, there is architecture in New York City. Whatever.

What a great idea, Zanna Roberts Rassi! What would we do without you? OK, I wasn't immediately excited about most of these designers or the work they brought in for the auditions, but I was impressed by the fact that they are all distinct from one another. I haven't memorized their names yet, but I think I'm going to be able to tell them apart. Usually there are a couple of designers with the same hairstyle or name and I get them mixed up for weeks. The other nice thing about this group of designers is that most of them seem to know how to sew and they are not menswear designers trying to branch out into womenswear for the first time.

Benjamin is from Australia, so he is not really very familiar with the phrase "all about the Benjamins." Believe it or not, he is not sick and tired of hearing this. In fact, he has no idea what you are talking about. Just please stop talking. You are giving him a headache. I liked Benjamin's layered chiffon runway look this week; it was my favorite look on the losing team.

Michelle is the punk girl from Oregon who is trying way too hard to be fun and doesn't really seem to understand the meaning of geek chic. But I do like her clothes.

Amanda is an ex-Mormon with a famous brother and a desire to make clothes for cool girls. So far I'm not impressed.

Patricia is the Native American artist. Her fabrics are amazing and I loved her runway look, which placed her in the top three, but I'm wondering if her design skills can go beyond creating great fabrics.

Joseph is the crazy cat lady. His designs are fun and weird and we'll have to see if he can actually perform on the show.

Daniel will probably come to be called Uncle Daniel because he really knows his technique and he is very willing to help the other designers. I wasn't really blown away by the clothes he brought in for the audition, but there is no question he is mad talented and his sculptured black suit with a cigarette pant was impeccable. He won the challenge this week. Congratulations, Daniel!

Kate makes cute dresses. That's all I can say for now.

Kate: "I enjoy finding people's weaknesses and then making them hate themselves."

Oh, right, I forgot to mention she's also a completely horrible human being.

Richard made a really cool asymmetrical dress that was in competition for the win. During the road to the runway, we learn that Richard doesn't just like himself; he loves himself.

You leave him alone, Kate!

James is clearly an experienced ready-to-wear designer, but I find his clothes rather mundane. He was in the bottom three this week and blamed it on his teammates, claiming they forced him to make the top more boring, when that is actually the opposite of what they suggested.

Layana thinks she will be good for ratings, but so far she is the least memorable designer. But the season is still young and so is she.

Tu is the ex-monk. His runway look this week was pretty cool.

Samantha brought some fun clothes to her audition, but her runway look this week was forgettable.

Matthew is the happy fun guy inspired by drug addiction.

Stanley's mother was not able to pray the gay away, which is strange, because that sounds like it should work.

Emily seemed nice enough and I loved the melted chiffon dress she brought in for the audition. It was pretty hilarious that she claimed her hatred of team challenges was based on the fact that she would end up doing all the work for everyone else. What actually happened, of course, was that the entire team ended up doing her work for her and she still couldn't complete a single article of clothing. Nina Garcia tried unsuccessfully to make an even more outrageous claim: that Emily's was the least finished look in the history of Project Runway. It was certainly awful, but we've seen less finished looks before. She was in the bottom two with Cindy.


Cindy is the lady who likes showing us her giant house and telling us that she's actually been to Paris.

Cindy: "Well, for all you SNL fans, I'm 59! I'm 59! I can kick! You know, I need to do that without this dress on, but, you know, maybe later at Trader Vic's, boys and girls. What do you say? I'm 59! You know, I was going to bring out my walker tonight but it just didn't go with the cleavage. So, while I'm here being all confessional, I guess I have a sudden urge to say something that I've never really been able to air in public. So, a declaration that I'm a little nervous about but maybe not quite as nervous as my publicist right now, huh Jennifer? But I'm just going to put it out there, right? Loud and proud, right? So I'm going to need your support on this. I am ... a funeral director. Yes, I am a funeral director. No, I'm kidding, but I'm not really kidding, but I'm kind of kidding. I mean, thank you for the enthusiasm. Can I get a wolf whistle or something? You guys might be surprised, but I am not Honey Boo Boo Child, No, I'm sorry, that's just not me. It never was and it never will be. Please don't cry, because my reality show would be so boring. I would probably have to make out with Wendy Pepper or punch Daniel Franco in the nuts just to stay on the air. It's not bad work if you can get it, though. But seriously, if you have been making clothes from the time you were a toddler, as I have, then maybe you, too, might value privacy above all else. Privacy. Well, I may never be up on this stage again, because once I turn sixty I'll be too embarrassed. Change: you gotta love it. I want to be seen, to be understood deeply and to be not so very lonely."

Well, Cindy, your dress was the worst thing on the runway this week, but there was no way the judges could send you home after such a bewildering speech. Emily is out. Sorry, Emily!

I'm actually looking forward to this team edition after seeing what they actually meant by teams. I think that Bunim/Murray just gave up and realized that subtlety wasn't their thing and came up with this so designers would interact instead of purely being bitchy talking heads. It also looks like there might be actual characters this time, too, which I've missed. We haven't had anything great since "leath-ah", and I miss that.

God, I'm so optimistic. Next week is going to crush that, isn't it?

Wasn't too bad of a start. There are some interesting designers with skill. I'm sure they'll shake up the team thing so things are bound to get more hostile. After watching the road to the runway special, I decided I liked 2 people, and they turned out some good stuff on the runway this week. First, I just can't quit Crazy Cat Lady. I heart him. What can I say, quirky nerdiness is cool to me. I also heart The Stache. He's just so warm and fuzzy.

For the record, I would abandon PR long before I stopped reading your blog!

HI hello~ please visit our handmade stuff shop in etsy~ we sell handmade natural soaps, phone charms and many more~ thank you and have a nice day!
http://www.etsy.com/shop/SoapliciousSoap