Mondo: "I am emotionally drained."

I'm also starting to find Mondo a little exhausting. And there were way too many fights in this episode. About nothing:

Kenley: "Wow, that is a beautiful sketch, Michael. You should teach Mondo how to sketch like that."

Mondo: "I heard that and it really hurt my feelings."

Kenley: "You can't hear me because you are standing all the way over there."

Kenley: "That's impossible. You are too far away to hear me."

Kenley: "I don't know why you keep saying that. You obviously can't hear me. You are standing on the other side of the room."

Mondo: "What the hell is wrong with you? I'm telling you I can hear you."

Kenley: "Fine! You can hear me! What were we arguing about?"

The challenge this week was fascinating. It was the first challenge this season that actually made sense. The designers had to make a garment that could be produced at a specific price point. And they worked with an actual coster, who determined exactly how much their design would cost to make and how much it would sell for. There have been challenges is the past in which the designers had to keep budget in mind, but I don't think they have ever gone into this much detail. I was a little surprised that they were going for a $300 to $500 price point, which seems like a lot, especially when you are creating garments you could get at H&M for about $19.95. I'm kidding, of course. They would cost $29.95.

Sorry, Kenley! That dress was boring, but I'm sorry to see you go.

Austin and Michael were the middle two this week. Austin made a decent fuchsia swing coat and Michael made another pretty but boring dress that consists of two pieces of fabric stuck together in a way that prevents you from being able to wear a bra. Joanna is pulling her hair out. Michael promises he will get his point of view across. Which is great because more of Michael's point of view is exactly what nobody has been asking for.

The big deal this week is that Mondo can't sketch. He had no way to express his concept to the coster, which was a really important part of the challenge. Obviously, he won. So let's look at the sketch Mondo made this week: 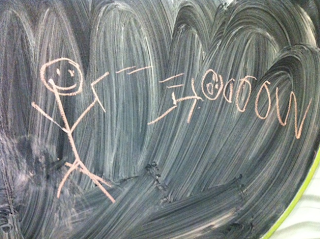 Mondo: "See, it's a guy shooting another guy, who is saying, 'Ow' because it hurts."

Look, don't get me wrong, it's a great sketch. I think it's a powerful image that comments on the prevalence of gun violence in modern society. I'm just not sure it's an effective way to explain your idea for a dress. But what do I know? His dress was super-cute, by the way. Congratulations, Mondo!*

Just for fun, I am actually going to mention the purported host of the show, Angela. I have avoided her all season, so I think it's time to give her a say:

The really sad thing is THAT'S THE MOST INTERESTING THING SHE HAS EVER SAID!

That's it. Tune in next week for the finale.

[The sketch was actually made by our friend's six-year-old while we were eating yogurt recently.]
Posted by eric3000 at 6:44 PM

I was only disappointed that when Michael did his impression of Isaac, he didn't flip his wrist out and declare something, "Fresh!"

I think this would have been so much better with the regular cast of PR. I don't think that the three in the finale would be the same - I don't think Michael would have made it this far, or Austin for that matter. I'm not even sure that the group of "all stars" would have been the same. Let's just call this show what it is - "Mondo finally gets the win he deserved in the first place."

I love the sketch. He should consider a career in the arts.

Yes, this has become the show where Mondo must win to make up for that travesty a few seasons back, but he is becoming quite annoying, no?

None of the entries really blew me away, so once again a lackluster final challenge, which is pretty par for the course.

Mondo has an emotional crisis EVERY EPISODE! Enough, Mondo!

Poor Kenley. For some reasons the judges just did not like her. I loved everything she made, and now the sole female voice is gone, which both saddens and annoys me, because no matter how gay they are, men still do not understand what women want to wear. (Michael's scarf dresses are a case in point.)

Scenario, the cost Office 2010 Download of file change issues and person retraining is significant, specifically where The item office won't know what it's people are accomplishing.,In . Madelyn Dez dez bryant McIntire, boss connected Office 2010 with Microsoft's Offered Technological know-how Arranged, revealed inside a report. "We are usually very happy to use a part to aid administration entities reach those that have different skills.In Microsoft Office 2010. Download Office 2010